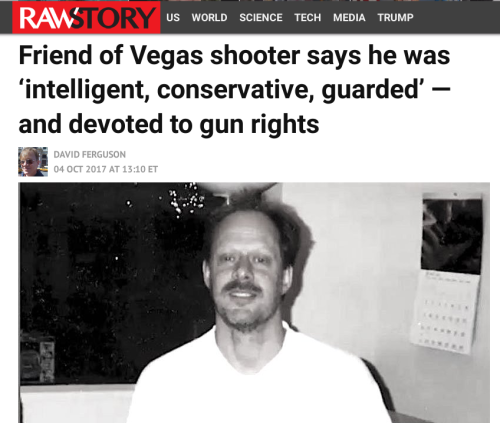 —
Summary: Via spoken word, 4th World Radyo host @TheAngryindian soberly addresses the recent domestic terrorist event (October 1, 2017) in Las Vegas, Nevada USA carried out by Euro-American millionaire and avid gun-collector Stephen Craig Paddock during a Country Music festival and what this really means for non-White America under a far-right, neo-Nazi friendly, Trump presidency. Although the (acknowledged) terrorist in question personally reflects everything the US right-wing vociferously claims to stand for, Mr. Paddock –a non-Muslim White American – nonetheless decided to focus his rage against his own ethnographic and sociopolitical population. This paradoxical state of hostile affairs has utterly confounded the finger-pointing conservative lobby – which was eager to erroneously fault Antifa; political Leftists and/or Muslims for the crime – who find themselves morally paralysed by the solid fact that Mr. Paddock had attacked a right-wing; republican-voting, overwhelmingly Eurosettler Christian-populated social event (and a nearby petrol depot) with the sort of modified, military-grade, automatic weaponry embraced by MAGA and the National Rifle Association (NRA), and tactics favoured by far-right/White Power extremists intent on creating an American Reich ‘by any means necessary’. These are the very same people who demand and bully mainstream society into respecting their belief in the G-d-given right of each and every White American to purchase; stockpile and threaten to use automatic fire-power (and lynching) against Afro-Americans; observant Muslims; ethnic Jews; abortion providers and non-European, Spanish-speaking immigrants in the name of White Christian American ‘self-defence’ against ‘Cultural Marxism’ and ‘Sharia-Law’. So, should we allow White America escape collective criticism, or should we all just pray the hate away and save laying blame upon the feet of Black (and White) NFL players protesting racist police brutality?
—
EXTRA: Ancient (live) bootleg of the late Poly Styrene performing ‘Identity’ by w/ X-Ray Spex; an archived mainstream news media interview by Christopher Hitchens of two national leaders of the American neo-Nazi movement during the 1980’s, showing that the undercurrent factors behind the alt-Reich have always been with us

Notes: Forward us your suggestions as to how Aboriginal & African communities can effectively, non-violently and intelligently respond to our respective issues. Your suggestions and audio responses might be mentioned/played on future dispatches.
—
eMail + [4thworldradio@gmx.pt]
SKYPE + [ID: aboriginalnewsgroup]
SIP + [sip:redaktoro@sip.antisip.com]
XMPP + [RadioAboriginal@jabberix.com]
Hangouts + [ID: aboriginalnewsgroup]
APNSPR + ‘feeds.feedburner.com/aboriginalpressradio‘